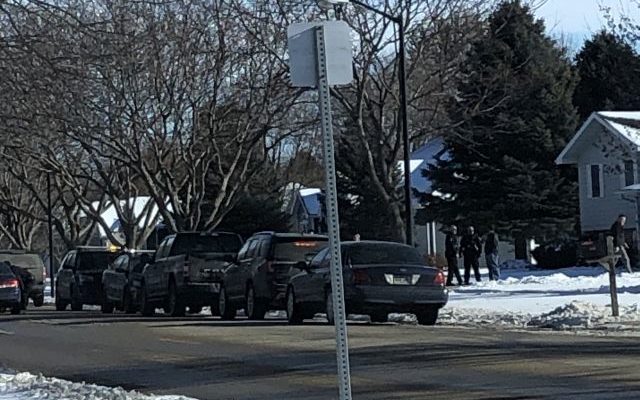 Lt. Marci Gebers says it began shortly after 1:00 p.m. Brookings police had been informed that a stolen vehicle may be headed towards Brookings. Police spotted that vehicle on Interstate 29 near exit 132 and attempted to stop it.

It did not stop but drove into and through Brookings at high speeds, even hitting 100 miles an hour.

Gebers says, because of the speed and reckless driving, police ended the chase.

The vehicle was later spotted, abandoned, on the 900 block of 15th Street South.

With the help of the Sheriff’s Department, a perimeter was set up and a search began. Gebers says the passenger was quickly found and arrested.

Police received a call a short time later from a woman on the 1300 block of Pheasant Run Road. She reported an unknown man had entered her residence and asked to use the phone. She called 911 instead and escorted the man out of her house.

Gebers says he took off running but was soon found in that area. He had climbed an evergreen tree.

That man was identified as the driver. He is 38-year-old Cody Hall of Sioux Falls. He was wanted on four warrants that included drugs and aggravated assault. New charges include possession of a stolen motor vehicle, aggravated eluding, driving with a revoked license and second-degree burglary.

The passenger, 46-year-old Charles Olson of Sioux Falls, has been charged with obstructing law enforcement, possession of a stolen vehicle, and harboring a known felon.

Gebers says Hall had a knee injury that was checked by ambulance personnel before he was taken to jail.