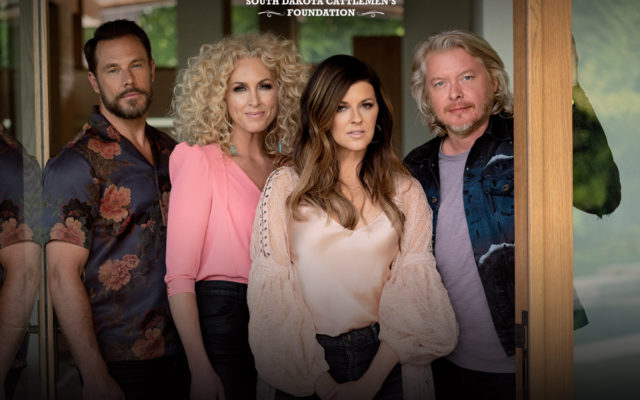 SIOUX FALLS, SD – The South Dakota Cattlemen’s Foundation presents Little Big Town, a concert to benefit
Feeding South Dakota has been rescheduled for Saturday, June 19th, 2021. Please hold onto your tickets
as they will be honored and valid for the new date. Tickets start at $39.50 and are on sale now.
“While the South Dakota Cattlemen’s Foundation is saddened by the postponement of not only this year’s
Prime Time Gala, but also the concert, we are thrilled to have Little Big Town joining us at the 8th Annual
Prime Time Gala & Concert on June 19, 2021,” said Ryan Eichler, President of the South
Dakota Cattlemen’s Foundation. “Even though we aren’t able to get together in-person this year, our
organization is committed to continuing our mission to provide the most vulnerable South Dakotans
access to beef; the most complete and nourishing protein on earth. We are humbled and honored by
the willingness of our event sponsors and producers to provide an initial donation to Feeding South
Dakota in the amount of $150,000,” Eichler shared. “The people behind our state’s farms, ranches,
and industry-related businesses are the most compassionate and giving people around. We are very
proud to represent them and overwhelmed to facilitate this and future donations to Feeding South
Dakota. We can’t wait to come together again in-person next June!”

About Little Big Town
GRAMMY, ACM, CMA, and AMA Award-winning group, Little Big Town — consisting of members Karen
Fairchild, Phillip Sweet, Kimberly Schlapman, and Jimi Westbrook — first entered the music scene over 20
years ago with hit songs “Boondocks,” “Bring It On Home,” “Good As Gone” and the GRAMMY-nominated
“Little White Church.”
Their breakthrough albums Tornado and Pain Killer produced multiple #1 singles, including “Pontoon,”
“Tornado,” and “Day Drinking,” as well as the history-making, best-selling country single of the year (2015)
“Girl Crush.” 2017’s, The Breaker, debuted #1 on the Billboard Country Charts and Top 10 (No.4) on the
Billboard 200 to critical acclaim, marking the group’s fourth Top 10 debut on the Billboard 200 chart. The
album features their GRAMMY-winning, multi-week #1 single, “Better Man,” as well as the 2019
GRAMMY-nominated, “When Someone Stops Loving You.”
The band recently released new music from their recently released ninth studio album, Nightfall, the
Grammy-nominated song “The Daughters,” country single “Over Drinking,” and “Sugar Coat.”
Little Big Town has earned more than 40 award show nominations and in the past five years has taken
home nearly 20 awards, including multiple GRAMMY, AMA, People’s Choice, CMA, ACM awards, and an
Emmy award. The Grand Ole Opry inductees (2014) went onto receive their star on the Nashville Walk of
Fame in 2017. For more information, visit www.LittleBigTown.com.
About the South Dakota Cattlemen’s Foundation
The South Dakota Cattlemen’s Foundation (SDCF) joined forces with Feeding South Dakota in May 2013
to create their signature event, the Prime Time Gala & Concert. The goal of this event is to not only raise
critical funds for Feeding South Dakota’s mission by providing more beef to food insecure families
throughout the state, but also to support the long-term viability of the beef industry by promoting the
nutritional benefits of beef consumption and value of modern production.
Since hosting the first Prime Time Gala & Concert in June 2014, the organization has raised over
$1,379,360 for Feeding South Dakota. The Prime Time Gala & Concert also helps to further the mission
of the South Dakota Cattlemen’s Foundation by supporting the South Dakota Cattlemen’s
Foundation Scholarship Program. For more information about the South Dakota Cattlemen’s
Foundation, visit www.sdcattlemensfoundation.com.
About the Prime Time Gala & Concert
Each year, over 1,600 guests attend the annual Prime Time Gala at the Sioux Falls Convention Center with
a country music concert to follow at the Denny Sanford PREMIER Center. Funds raised at the gala through
event sponsorships and table sales, silent and live auction, truck raffle and concert ticket sales benefit
Feeding South Dakota. The concert is also open to the public. For more information about the Prime Time
Gala & Concert, visit www.sdprimetimegala.com.
About Feeding South Dakota
Feeding South Dakota is a hunger relief organization that is fighting daily to eliminate hunger throughout
the state. Of the 12.8 million pounds of food that Feeding South Dakota distributes on an annual basis,
only about 10% of that is protein. High quality protein, like beef, plays an important role in overall health,
including weight control, by increasing satiety and helping to build and maintain muscle mass.