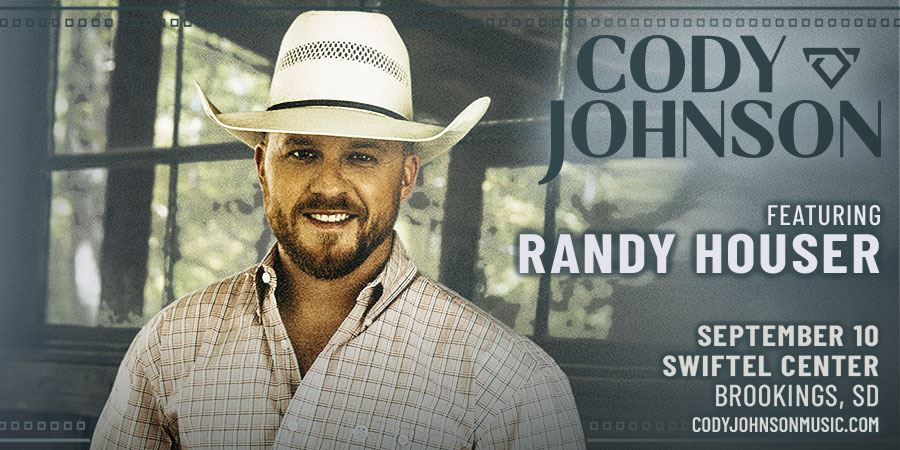 COJO Music/Warner Music Nashville country powerhouse, Cody Johnson has just announced 23 new dates for the final part of 2022, including what is sure to be a sold-out show in Brookings, SD. Cody Johnson, along with country music mainstay, Randy Houser, will be tearing up the stage at Swiftel Center on Saturday, September 10th.

Cody Johnson is releasing the title track off his sophomore major-label release Human The Double Album to country radio. “Human,” written by Tony Lane and Travis Meadow, was triumphed by Bob Oermann in Music Row, “I didn’t think it was possible to follow a perfect performance like “Til You Can’t”, but this (“Human”) stunning meditation on frailty and mistakes is just as breathtaking. This man is dusted with the glitter of superstardom.” Billboard praised it as a “gut-punch, heart-on-your-sleeve vulnerability” and People Magazine said the song is “a vulnerable ballad about mistakes and forgiveness.” “Human” is the second single to be released off the 18-song project following the highly successful two-week #1 hit “’Til You Can’t.”

Cody introduced “Human” before he performed the song at the iHeart Music Festival in Austin on May 7, “One thing we all have in common not just in the U.S. but across the world; no matter how you feel about politics, no matter how you feel about religion, no matter what race you are, no matter how much money you have in your bank account, whether you dress like me or like you do, one thing we all have in common is the fact we’re Human. We are all the same. We’ve gone through a lot in this country the last two years. We are all doing this together. We all have struggles even though they are different. This is why I chose this song to be the next single.” Bobby Bones declared, “Cody Johnson is the winner of #iHeartCountry2022Festival for his epic performance.”

“’Til You Can’t” is now certified Platinum by RIAA, bringing his career certifications total to 14, further cementing the tremendous impact of the “roaring barn burner about seizing today, living with gusto and chasing your dreams no matter how big” (MusicRow) song. Cody won one of his two recent CMT Music Awards (Male Video of The Year) for the tune’s official music video and he performed “’Til You Can’t” on The Tonight Show Starring Jimmy Fallon and The Kelly Clarkson Show. To date the song has logged nearly 275 million global streams.

Known for his explosive live shows and electrifying stage presence, COJO Music / Warner Music Nashville Platinum recording artist Cody Johnson has established a following of passionately loyal fans who regularly sell out shows across the country. In the last year, Johnson, who MusicRow predicts “just might be the future of real country music,” has released a critically acclaimed, award-winning feature-length documentary (Dear Rodeo: The Cody Johnson Story), delivered two celebrated albums (Human The Double Album and A Cody Johnson Christmas), sent his most successful single to country radio with Platinum-selling, two-week #1 single “’Til You Can’t”, added more RIAA platinum and gold singles and album certifications, played sold-out concerts and more. In fact, Johnson increased his worldwide streams by nearly One Billion in 2021, growing from Two Billion to over Three Billion streams and is averaging 25 million streams per week.

With an inimitable voice the New York Times describes as “wholly different, thicker and more throbbing, a caldron bubbling over,” Randy Houser racked up three consecutive No. 1hits with his album, How Country Feels, plus earned critical acclaim for his powerful delivery of the Top 5 smash and CMA Song of the Year-nominated “Like A Cowboy.” Houser added a fourth No. 1 to his catalogue with “We Went” from his 2016 album, Fired Up. Houser’s fourth studio album, Magnolia, marks a new era for the singer/songwriter which many have called “Houser at his best.” Listeners got their first taste of Houser’s critically acclaimed rootsy project with the Top 30 hit “What Whiskey Does,” which debuted at Country radio as #1 Most Added and Rolling Stone immediately dubbed “a classic tears-and-twang drinking song.” The album which NPR claims is home to “some of the most expressive performances of his career,” also includes his single, “No Stone Unturned,” a gypsy-hearted traveling song that Whiskey Riff calls “the best song, from the best album of 2019.”

In early 2021 Houser teamed up with good friend Jamey Johnson to share the stage on their unforgettable co-headlining Country Cadillac Tour. The tour, amongst the first routed tours in 2021 consisted of 18 social distanced tour dates and a one-of-a-kind live stream: Live from Graceland from the iconic home of Elvis Presley.

With assertive timing, Ella took her unapologetic authenticity to Nashville & locked in her first publishing deal with Sony Music Publishing Nashville in 2021. Since relocating, Ella has hit the road with Randy Houser, Koe Wetzel & Jamey Johnson. Her breakup anthem “If You Have To” has quickly grown her following & her second single, “Damn You” showcases all the confident energy Ella has to offer to country music fans.

While paving the road for her touring career, Ella has hit her stride in songwriting. Elle King’s latest single, “Out Yonder”, co-written with Matt McKinney and Bobby Hamrick, has earned Ella her first label cut. Then her latest track, “Hey Ma I Made It”, fans will discover the tender side to her lyrics with her family relationships. This summer Ella will drop a summer anthem with “Country Boy’s Dream Girl”, that pays homage to her southern ways and keen ideal for the simplicity of what a country boy undeniably adores as well.